← Grace for the Idiot.
Expect the Unexpected →

The Me I am Going to Be. 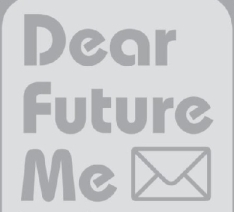 I was sitting in a circle of meditating women the first time I knowingly met my future self.  Future-Me and Current-Me had a short, life-altering conversation that afternoon two years ago, and her answers to a few simple questions have guided almost everything I’ve done since.  With relief, I can look back at my growing-up-self, and see that my future self had been with me all along.  Although she mostly hovered in the shadows, she’d also inserted herself at key moments in my history to make sure I stayed on the path that leads to her.

I caught a whiff of her this weekend and my heart raced a little bit as I wildly looked around trying to hone in on her location and what brought her to me again. It happens like this for me.  I’ll stumble my way through life – cooking meals, shuttling people, running meetings, showing clothes, and then all of the sudden while I am pumping gas, I’ll know she’s there.  Sometimes I can’t figure out where she fits into the picture, but other times it’s glaringly obvious. The most recent rendezvous with her seemed pretty mundane.  I was standing in a hotel lobby and I turned to introduce my son to some women I barely know.  While he was shaking their hands, this random thought raced through my head: I have an awesome son. Boom, the floodgates opened and I was practically crying and holding back the urge to hug him and pour gushy emotional words all over him.  He’s a twelve-year-old boy and not really into all that.  Perhaps the tiny realization of the gift I’ve received in parenting was what made her show up.  It was almost as if she was shouting into a bull horn that only I could hear – This is a moment, Joy, lean into it and grab a piece to hide in your heart.  I’m not sure what was special about that particular moment, but I listened to her.  I’ve relived it a hundred times since it happened.  I can tell you what he was wearing and what the other women said to him and how one of them leaned back out of his view as she mouthed the words “He is so cute.” And how he was placed just to my left, but out of reach and when he finished shaking hands how he nodded and put his hands in his pockets and walked away in that slightly leaning forward manner of his.  I have no idea why this whole scenario made such an impression on me, but I’ve learned to listen to the nudge.

I know I risk sounding like a total nut job as I write this. If I named it intuition or gut instinct some of you might be more open to it.  It could seem less, well … spiritual.  Others would rather I use a language they understand and just listen to the Voice Of God and would be fine if I thought the Holy Spirit spoke to me at times.  In all honesty, depending on the circumstances of this strange emotional urgency, I call it all sorts of different things.

A friend of mine was searching for a school for her special needs son.  She sat in one after another admission presentations and during one of them she felt inexplicably weepy.  She called me that night and said “Either I am about to get my period or I just found the right school for him.”

Perhaps something similar happens to you.  You know that thing that helps you out when you are presented with two options and you just know which one to take? No amount of weighing or discussing really leads you to a logical decision, but deep inside the choice is crystal clear.  When I experience this, and the answer is obvious, I know it’s because that’s the pick that will lead me closer to the woman I met forty years from now.

Maybe you only sense this phenomenon in a more negative way, like in regret. I feel it there too. When I have that gutty guilty feeling that gnaws at me until I want to throw up.  I ask all my friends about what I did and they try to cheer me up and justify the thing I feel terrible about.  We all have those days.  Anybody would react that way.  You are only human.  I didn’t notice a thing. You were perfectly in your right.  But I know. Deep down, I know that whatever I did or said made me take a step away from my future self.  Or from the Holy Spirit. Or from God’s perfect will.  Or from the purpose of my life.  Or from listening to my intuition.

The sister of one of my friends repeats to her children, “Each day you get to decide what kind of person you will be.” I try to remember that.  I have a say in this matter!  My favorite Christian author/speaker is John Ortberg from Menlo Park, California.  I devoured His book, The Me I Want To Be, because it was like being given permission to be who I already know I am.  I try to reach that delicate balance between believing I am the master of my universe and can control everything, and being fatalistic and just letting life wash over me like an ocean wave without taking any responsibility for it.   Somewhere in the middle is this idea that I have a course to plot and there really is a way to get there.

After I met my future self, I realized that if God knew me in my mother’s womb, He likely knows me in my seventies as well. If He created me to be who I am, He created who I will become.  He probably wants me to follow the path to her as much as I do.

Here’s the thing that is complicated about chasing down my future self.  Only God and I have met her.  No one else gets those whiffs or emotional reactions when I bump into her.  Sometimes the choices I make with my life, my parenting or my career, well, they just don’t look right to those around me.  And I have to remember that other people don’t know the me I’m going to be and they have not been charged with the responsibility to get me to her.  That’s on me.  So, if I have to ignore criticism, endure well intentioned, but unsolicited guidance, or face down peer pressure to scramble my way to her, so be it.  I know where I am headed, and there are a million tiny choices that will get me there.

Question for you: Does any of this sound familiar?  What name do you give this idea? Can you remember the last time you experienced it?