← Fear.
These are a few of my favorite things… →

Mama, it’s never too late to change your mind…

I’m not what you’d call a dog person.  If I’ve ever hung out with you and your dog, I probably had to fake enjoyment and interest in your fur friend while we were together.  Sorry, I know it’s disappointing.   But the smell, the wet tongue, all that saliva, the hair stuck to my clothes after I left your house… I hated all of it.  And now here I am, a mama of two puppies.  How’d it happen?

Have you ever had a complete and utter change of heart? One day you feel one way about a topic and the next day you feel completely the opposite about the same topic and you cannot explain why?  I don’t think this happens very often in life, or at least it hasn’t happened to me very much.  Usually I need to do a lot of personal growth before I can change my attitude, or affect a mindset shift. But, overnight it happened to me about dogs, well, about these two particular dogs.

My daughter, Emma, is sixteen-years-old and has wanted a dog since she was about five-years-old.  She’s roped her brother into the crusade over the years, but we all know she was the driver of the We want a dog! campaign.  We’ve come close to acquiescing over the years.  When she was five we told her we would do it when she was eight.  But then she turned eight and we looked at each other and like, Ummmm no, we are not doing this thing at all, what in the world were we thinking?  (Note, over the years we’ve allowed banana slugs, goldfish, beta fish, frogs and a few nights with a cat.  None ended well.)

Emma has pined away for a dog for her entire childhood and there have been cycles to the volume of her desire.  Usually when a friend got a new dog, or when she’d see YouTube videos of cute dogs we’d hear about it, but the hardest to bear were when tough social situations occurred at school and the requests would surface again.  Sure, I felt guilty.  Who hasn’t heard rumors of studies that prove that children who grow up with dogs are better able to handle life’s ups and downs?  And who doesn’t get, on a basic level, that having something to hold, pet, love and be with is a great thing.  But I didn’t want the burden!  The understanding that this fictitious dog would be wholly my responsibility helped chase away my guilt.

A few years ago, some friends had a litter of puppies for whom they were trying to find homes.  I actually went and played with two of them.  Nope, it did nothing to my heart.   I watched my daughter’s face, crushed, envious of the kids who took them, and I felt nothing but resolute, firm, Not for us.

But seven months ago we pulled ourselves out of a life we adored and moved halfway around the world and the we-need-a-dog conversation started blaring once again.  My husband thought we really had no choice.  After all, they were total troopers about the move, but it hadn’t been easy on them.  We owed it to them, he thought.  But, I stood my ground.  My days were full of trying to settle us into our new lives. I couldn’t even find affordable beef for us to cook, where to get keys made or where to buy Emma a large enough water bottle to make it through a soccer practice in this tropical (oppressively hot) climate.  How was I supposed to take on the challenges of finding and raising a dog?

As our lives in Singapore formed and settled, it became obvious that the kids would be far busier here than they’d ever been at home.  Most days they leave before 7am and get home after 7pm.  After a twelve-minute family dinner, they rush off to their rooms for homework and downtime and then fall asleep exhausted.  Emma travels frequently with her sports teams and when she is in Singapore on the weekends, she is out with her friends as much as possible.  When we’d finally settled into our home and hit a relatively consistent schedule, I broached the topic with my daughter again.  I wanted to show her that not only did she have no time to take care of a dog; she didn’t even have time to enjoy a dog that someone else would willingly take care of.  She sadly agreed and I thought the subject was finally and forever shut.

This past Christmas we traveled to Thailand and enjoyed almost two weeks of bliss.  About three days before we returned home to Singapore, Emma brought the topic up again.  I have to admit, I was a little angry. I thought we were done with that nonsense.  Emma, how many times do we need to go over this? Our family travels so much, you are so busy, I have enough responsibility in my life as it is and we are not able to get a dog!

Though she was crestfallen, she agreed with everything I said. I know, I know… But, dear reader, you can probably relate to moments in your own life when your head is speaking logically, but your heart is just telling you something else and it just won’t stop.  My girl wanted a dog down to her very core and she knew and understood that it did not make any sense.  But when we finished dinner that night, I really did think the conversation was finally, bitterly, disappointedly over.  For good.

We went back to the hotel room that night and Brad offered to take the rollaway cot so Emma could sleep with me because her back was hurting.  I had insomnia so I was awake in the night reading when Emma started talking in her sleep. She’s been a nighttime talker and occasional sleepwalker for as long as we can remember, and usually her nighttime conversations are hard to follow and full of gibberish, but I still get a kick out of trying to keep it going as long as possible.

After the first few indecipherable sentences, she started speaking to someone in her dream about their dogs.  What do you do with your dogs when you go on vacation?  Oh, it’s that easy?  Maybe you can tell my Mom about that.

Her voice sounded so young, vulnerable and full of hope that my heart seized up and that firm, logical resolution I’d held for years slowly leaked out of it.  Just like that.  In that moment, I had one of those cosmic realizations about my mothering of her – it is almost finished.  In two years from now, we will be preparing for her to move back to the US for college and my chances at pouring love into her will be few and far between.  All that I want to show her, impress upon her, model for her, teach her, give her or do for her has to happen soon or it will become a parental regret.  Since she entered Kindergarten, she has only asked for three things in life that were in my power to give her that I have firmly rejected: 1) to see movies rated above her age like all her other friends, 2) to stay up later than her bedtime like all her other friends, and 3) to own a dog.

In the middle of the night, in that foreign country, my heart had a change.  I still didn’t want a dog, and I still knew that if we got a dog I would be the one to take care of it, but I also knew this was going to be my swan song offering of love to my girl.

The next morning at the pool I scrolled through my facebook feed and saw this: 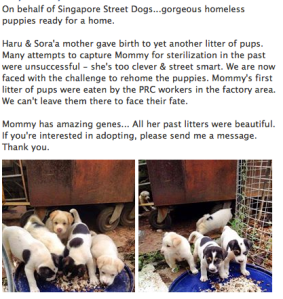 Divine timing, dear reader.  I passed my iPad over to Emma and told her to contact the rescue organization and ask what the process for adoption would be. She was confused, but happy.  She and Louis began poring over the pictures of the puppies.

We flew home and the next morning, Louis, Emma and I headed to the vet who was taking care of the pups. We played with and were peed on by the whole litter and another family showed up and quickly picked one, so we scrambled and picked out ours.  I spontaneously decided we needed two of them.  I have two kids, so we need two puppies.  Or, I’ll have two kids leave home soon so I will want two to remain.  Or, I always wanted to have four kids, but life only gave us two and now we can finally have two more.  Or, I wanted these pups to have each other to play with, or it was just so sad to separate them from the rest of the litter.  You can pick your reason, dear reader, because there is a seed of truth in each of them. 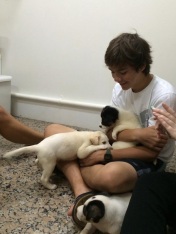 Here we are seven weeks later, and it continues to be a wild ride. Even though my kids are both too busy to take care of them, they do what they can.  They each take a feeding and Louis has stepped up to take the dogs on runs around the block.  When I had to travel to the US for a really long work trip just days after getting them, they took turns sleeping on the couch for the middle-of-the-night potty breaks.  They’ve each experienced the not-so-fun part of parenting these pups.

We were all correct, Emma doesn’t have much time in her life for dogs, but when she gets home and they wag half their bodies in happiness to see her, or when Louis returns home exhausted, but says, I’m going out back to play with the dogs! and I stand at the kitchen window and watch my three puppies leap and pounce on each other… well, then I know I made the right decision.

Even my own heart has melted and I don’t hate the puppy smell as much.  I probably give a few too many baths, and I obsessively wash my hands and don’t wear black unless I know I can escape the house without being tackled by them.  But when I’m out with friends and I realize I have a dog hair stuck in my lip-gloss, I just say, “Ha Ha look, it’s just a hair from one of my kids, er, I mean dogs.”

To stay up-to-date on all things joylibby.com including new anecdotes about the Singapore Street Dogs, subscribe to receive new essays in your email inbox!

4 Comments on “Mama, it’s never too late to change your mind…”