I once was blind 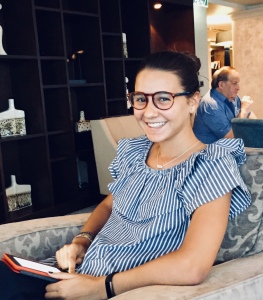 Six years ago, during a dinner party of adults, I excused my 12-year-old son to go to my room to watch a movie. Much later, after the dishes had been cleared and the last of the guests departed, I climbed the stairs to check on him. He’d dragged my armchair across the room to sit comfortably, three feet from the screen. “This is the only way I can see,” he explained. “I have to do this in math class too, in order to see the board. Didn’t the teacher call you? She said she would.” Off to the eye doctor we drove and sure enough, the boy was near-sighted. His chatter filled the first car ride after picking up his frames. “Can you see that over there? Look at those houses way over there! I can see their rooftops!” On and off went his glasses as he tested before and after versions of his sight. The most remarkable thing, he shared, was seeing individual leaves on the trees as we drove past.

A few weeks ago, my 20-year-old daughter returned home for winter break. In our taxi to see the new Star Wars movie (a Christmas tradition three years running), my son exclaimed, “Oh no! I forgot my glasses!” The driver pulled a quick u-turn and he hurriedly ran up to his room to get them.   After the (thrilling!) movie, he handed his glasses to his sister to hold while he removed his sweatshirt and she jokingly put them on. And then she stopped dead in her tracks. Her mouth fell open in awe and her head made a slow circle, taking in the hubbub of the mall – all the glory of Christmas – the rushing shoppers, twinkling lights and bright decorations. She almost couldn’t believe what she was seeing.  Apparently, she is also near-sighted, but we didn’t know it.

The following morning, we landed in Bangkok as planned and made our way to a shop where she had her eyes tested and picked out frames. Just like that, she got a new look – and a new outlook. It’s been a week now and she hasn’t stopped marveling at what she can see. She’s doing exactly what her brother did six years ago. On the top of a high rise admiring the view, she pointed to the distance. “Can you see that red building?” she asked. “How about that sign – can you read that sign?” The glasses went up and down over her forehead as she compared her naked vision to her improved vision. Nature is the biggest shock, she agrees with her brother. When we arrived at the Thailand coast to a little town called Hua Hin, she stared at the ocean. “Guys, I’ve never seen the ocean look like this, you know.” We all razzed her, “How could you not know? How could you not realize you couldn’t see?” Here’s the best way she’s been able to articulate it: everyone’s vision ends somewhere. The horizon, the distance, the skyline, whatever you name it, is as far as the eye can see. She just assumed that spot was a lot closer for everybody than it really is. Her reality was short-sighted.

The New Testament records a story of Saul (later known as the Apostle Paul) who God intentionally struck blind in order to stop the evil persecution of new Christians. Saul was a pretty awful character, honestly. After three days of blindness and misery, a minister nervously approached him to offer prayer and Saul, at the end of his rope, I imagine, accepted the offer. Saul repented of his wicked ways and the Scripture says, “something like scales fell from his eyes,” and his sight returned. He changed his name to Paul and became the greatest Christian evangelist of all time. He wrote much of the New Testament and his is a story of utter and complete transformation – a life lived one way and in a single moment that life was changed and made 100% new. A true conversion. He was blind – blind to his own evil ways, blind to the power of God’s love and the welcome of His embrace and physically too blind to continue to murder and imprison Christians – but then… then he could see. He could see the grace of God that welcomed (even) him. He could see his own sin and failings and he could see a way of escape from the dark life he’d been living.  He could see so clearly that he reordered his entire life. It’s as if even his heart (or mind or soul) received vision after the scales fell.

I’m pretty sure I stumble my way through life mostly blind. Full of uncertainty and insecurity, I do my best with the vision I’ve got. It probably stops long before the horizon and much before I can take in all the beauty around me.  It reaches only as far as my trust in my marriage, my security in my friendships, my hope placed in God and my handle on anxiety. On a given day, (sometimes depending on my struggle with insomnia), those can be fairly short distances. My vision is blurred and distorted by my numbing, my self-doubt, my self-sabotaging ways and my utter lack of sleep. Sometimes, I see myself bigger than I really am, the hero of a story where I am a bit player at best, and other times I view myself as weak and small­ – the victim of a story – where I am meant to shine. My vision isn’t trustworthy all the time. It doesn’t always provide me the truth.

I know what it’s like to have moments of clarity, though. Those watershed moments where suddenly I think, “I see it all clearly now.” Recently, I had a moment like this within my marriage, where by a small miracle I could actually see my contribution to a problem and I was able to own it rather than lay blame. Those were heavy scales that tumbled down that day. I remember a day long ago spent with two friends and the nagging feeling of being excluded and ignored. “I never need to feel like this again. I don’t need these friends in my life,” I realized. And it was done. As an entrepreneur I probably have had most of my clear thinking moments in my business. My own actions and efforts are the biggest predictors of my success. As simple as that sounds, that’s rare clear thinking for me. I’d rather factors beyond my control be in charge.

A casual friend told me about the moment she knew in her gut she must leave her marriage. She was on a couples date and her husband was openly flirting with the other woman.   Then she overheard the woman quietly ask her husband what the secret to a long happy marriage was. Her husband of twenty years whispered, “I don’t know. I hate her.” Was this the first time he’d disgraced her in public? Probably not. And it wasn’t the first evening out that ended with hot tears of humiliation and shame, but it was the moment “something like scales” fell away for her.

As I age, my vision of my parents is becoming sharper and more in focus. I see their tender hearts and how well they’ve loved me. It’s clear now that they are humans who did their very best and though at times I may have needed more, or different, they gave me everything they had. This clarity brings a flood of gratitude. My wasted and limited vision in my teens, 20s and even into my 30s didn’t always allow this. I was in a blurry zone, but it’s clear now.

I’m compassionate to that younger self, though, the one stumbling around with her scales in place, doing the very best she can. She’s still with me now much of the time. My best friend tells me to try to do just the next very best thing and when that is done, go on to do it again. When I embrace that advice even though I can’t see the horizon or barely even the path beneath my feet, somehow I know not to step into the ravine. I know to avoid the potholes and to duck if a branch is hanging too low in front of me. Just the next very best thing is what I do.

With everything in me, I hope that 2018 is a year where clear thinking and more importantly, clear seeing reigns. Dear Lord, may I really see the woman standing in my mirror and understand her potential. May I see the women I meet and know them as three-dimensional humans, full of their unique hopes, stories and abilities. May I see my husband and children as people in process, like all of us. May the scales fall off in every role and every relationship. May I experience the beauty of the individual leaves and the rhythm of the waves in a new and more detailed way.

But if my year turns out to be muddled, confusing and clouded like many of them that have come before, may I trust myself to do just the next very best thing.  May I work with what I can see in front of me, through my thick and heavy scales, and still enjoy 2018 one hesitant, nervous step at a time and somehow, through God’s grace, make my way down the path that rises up to meet me.

Blessings to all of you in the New Year. With your scales, your half-scales or your brand new glasses, I’m in it with you.

P.S. But seriously, how cute does she look in those glasses?