The guitar teacher who made a difference. 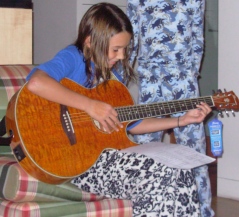 After an unusually hectic Sunday morning, I arrived just in the nick of time to my daughter’s end-of-the-semester guitar recital.  We do this twice a year and always look forward to it, but this one was special because it was Emma’s last at her current school – she’ll be off to high school in the fall.  I watched thirty minutes of tiny Kindergarten bodies barely able to hold their guitars and marked the passing of time by noticing that the fifth graders were getting really confident and attempting more challenging pieces.  I’ve enjoyed seeing the same faces on stage and in the audience semester after semester.

Before I knew it, it was Emma’s turn, and her teacher made a little speech before she played.  This is when the moment happened.  Patrick is a quiet, unassuming and gentle man who’s never flustered.  While he was introducing Emma, he fought back tears, covered it by strumming his guitar for a few seconds, and then they moved into her song.

After her performance, she sat down next to me, let her own tears flow and whispered, “I had no idea it was going to be like that.  I will miss him so much.”

I just sat there stunned.

When Emma was in the first grade she wanted to learn how to play the guitar, but I insisted she learn the piano.  She has long fingers seemingly made to span the keys, and the truth is that I had always regretted quitting piano lessons myself.  I quoted a random recommendation I had read that said all musicians needed to start on the piano because it offered a basic knowledge that could then be applied to other instruments.  I told her she had to take piano for at least two years.  Emma obediently agreed, and off she went each week to a group lesson and eventually to her own private lesson.  She did well, but was never passionate about it.  When the time came to sign up for the third year, she reminded me of our deal.  “You’re quitting?”  I asked in astonishment.  “No, I am not quitting, I am goal oriented, and taking guitar lessons has always been the goal.  Piano was just a way to get there,” the nine-year-old responded.

Through a referral, we found Mr. Patrick Francis to teach her, and he told me how to buy the cheapest, smallest guitar.  For the first two years, Emma wanted her younger brother and me in the room with her and Mr. Francis.  We’d color, read books and listen in.

Emma has always been a tightly wound achiever-perfectionist sort of person.  Mostly, the world has acknowledged that by setting the bar just a little bit higher than she can reach.  It feels like well-meaning teachers and coaches are often pushing her to do and be more.  I see what they see.  She is a creature humming with potential, and they think if they just light the fire hotter, or wring one more accomplishment out of her, they will have harnessed it all.  It’s really hard to be that kid, the kid everyone thinks can do anything and smile while she’s doing it.

Mr. Francis took a different approach with her from the beginning.  Guitar lessons were her time to relax and explore her passion.  They’d listen to Beatles songs on his iPod and then he’d teach her how to strum along.  When she was in fourth grade she wanted to learn Dani California, but she didn’t have the confidence to sing along at her recital, so Patrick sang the song while she strummed.

During a particularly stressful time last year, she asked him if she could skip the recital.  For weeks she had been worrying about and dreading it.  “Of course you can skip it,” he assured her, and they resumed their weekly practices.  She never felt she had let him down, or that she hadn’t met an expectation.  Patrick’s just that way.  He rolls with it, and lets her take the lead.

Patrick moved to Asia for about a year and Emma tried two other guitar teachers.  David lasted a few months, and Randy lasted a few weeks, and then she took a hiatus from the instrument.  It sat, mostly untouched, in her room and I didn’t mention it.  When we received an email from Patrick that he, his wife and new baby were returning to San Francisco and he’d be teaching again if she wanted to continue, Emma’s face was bathed in excitement.

They picked up like they had never been apart.

I’ve been right there watching this relationship, this education and this growth in her, but I never really saw it until yesterday.  In a flash, I saw how this man’s influence had offered my daughter a chance to become more of herself.  He was able to stop the achievement train in her childhood for just thirty minutes a week.  Where other instructors may have been able to squeeze another effort or accomplishment from her, Patrick was able to quietly grow her confidence in herself and her love for the guitar.

In my stunned moment, I saw it all.  I saw the fragile-yet-determined little girl lug her guitar into his classroom and sit silently while he tried to figure out what kind of music would spark her interest, and I saw the confident fourteen-year-old comfortably gushing to him about her new favorite band.

But mostly, I saw that where my role ended as a mother, I had been lucky enough to find another adult who agreed to lead my child.  She needs more than I can give her, and not just because I can’t teach her guitar.  On the list of forty developmental assets for adolescence, number three reads:  Other Adult Relationships | Young person receives support from three or more nonparent adults.  She needs to see herself reflected from many angles in order to know and discover who she is and decide who she wants to be.  In our modern lives filled with busyness, and with family scattered around the country, finding healthy relationships with those “three or more nonparent adults” is tricky to say the least.  As I saw Emma and Patrick standing there together, my heart leaked a little.  So much is ending for her right now, and so much new is just around the corner.  Gratitude was oozing from my soul that Patrick had been a part of what had brought her this far.

I don’t know where Emma will be in ten years, or whether she’ll still love the guitar as much as she does now.  It doesn’t really matter.  No matter how she turns out, I’ll have some other adults to thank for helping her get there, and Mr. Francis heads the list.

A few weeks ago she brought her iPhone to her lesson and played Patrick songs from her new favorite band.  He hadn’t heard of One Direction, but they chose a song for the recital.  Below is the video of their final performance.  To Patrick:  Thank you for investing so much quiet and intentional energy into Emma.  Your patience and gentleness were just what she needed to flourish.  I hope that people somewhere someday pour bits of themselves into your baby boy.  Perhaps then you will know how deeply we appreciate you and what a difference you’ve made.